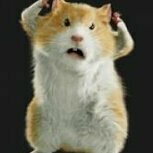 By 098FrostVortex098, April 3 in Development Blog