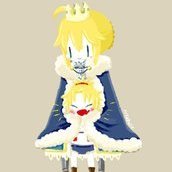 What's with these names containing only numbers ?

By RainCaller_, May 7, 2019 in General Discussions

33 comments in this topic