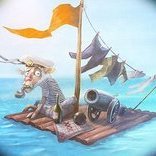 ALASKA can be bought by Cash on Russian Server

By tsuenwan, February 28, 2019 in General Discussions