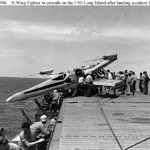 Sadly, it still is World of CVs

94 comments in this topic