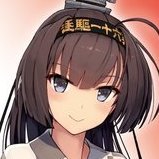 Would a premium kongo work at T6?

By AkiDucky, October 7, 2017 in General Discussions